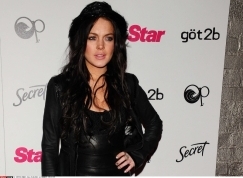 
Lindsay Lohan's father attempted to stage an intervention to "save" her Thursday (22.04.10).

Michael Lohan flew to Los Angeles to convince his daughter to enter rehab as he believes she is addicted to prescription drugs.

He went to her apartment building in Hollywood - where she presently lives with her sister Ali - accompanied by four plain clothes police officers, but she wouldn't let him in. Michael told X17online: "I won't give up, I'll do whatever I have to do to get her the help she needs."

Lindsay reacted angrily to her father's actions, branding him her "ex-dad". She wrote on her twitter page: "OMG!!!!!!!!!!!!!!!!!!! i have no choice but to make this public, due to my sister's safety, as well as my own, "my ex-dad" just WALKED INTO MY APT like the devil's advocate with officers. Let's not forget, that my father KIDNAPPED me from a COURT ROOM when i was 4 years old and is CRAZY he has NEVER paid child support, and is marrying a tabloid writer and can barely spell his own name due to his "brain" that has been ruined due to HIS drug use. (sic)"

Lindsay now intends to get a restraining order against her father, and also suggested he may have been accompanied by fake police officers.

She tweeted: "my lawyer isn't answering I NEED A RESTRAINING ORDER! MY SISTER AND FRIEND TOO!!!!! HE'S NUTS!!! my BUILDING didn't STOP him, isn't it supposed to be safe? THAT'S WHY I MOVED HERE! it coulda been FAKE cops! dressed up! (sic)"

Michael has previously denied not paying any child support for his children - Lindsay, 23, Ali, 16, Michael Douglas, 22, and Dakota, 13 - by ex-wife Dina, and accused Lindsay of "living in denial" over her prescription drug use.