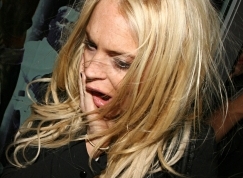 
Actress Lindsay Lohan, who was enjoying a holiday in Morocco, was left shaken when a man in a passing car pointed a fake gun at her.

Lohan revealed on her Twitter page, she was walking ahead with the security guard and some guy was following her, then pulled up in his car and pointed a GUN at the actress.

"I was on the phone with my mum and i screamed and ducked and the guy started laughing and pushed the trigger and it was a fake gun.. I was crying.. he scared me."

Poor Lindsay, that must have been a shock!

mark 04-11-2009 20:33 should have shot her and done us all a favour. She's on a self destructive spiral that makes Amy Winehouse look like Mother Teressa.
0