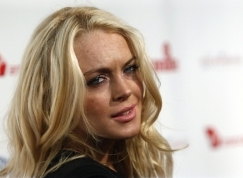 
The fact that Lindsay Lohan has abused drugs is probably the worst kept secret in Hollywood. Her estranged father Michael has talked publicly about her battle with prescription drugs in the past and now Lindsay is finally addressing the issue.

Lindsay admits that she's often turned to drugs and alcohol to ease the pain of her personal problems. And when her father started talking about her problems to the press, it only made her issues worse.

She told the UK Sun: “When my father was going public, that’s when I hit rock bottom. I abused substances too much and it wasn’t the answer to my problems. I tried to mask my problems with alcohol, cocaine, and mind-altering substances. Now I’m in a place where I don’t need to use anything and I feel emotions because I choose to.

Lindsay claims to be clean and sober now and has learned from the mistakes she's made in her past. She added, “I never want to be close to losing everything I worked for and aspired to have my whole life. I’ve made some dreadful mistakes but learned from them – that has probably saved my life.”

And she blames her addiction to cocaine on her father, who also abused the drug when he was younger. “I was only aware of cocaine because of my dad," she said. "I was terrified of it. But I tried it because I was stubborn, stupid and wanted to see what it was like. It’s not something I ever want to do again. It made me feel like s**t. It became uninteresting to me. I’m hyper anyway and I have that kind of personality, so I don’t need something like that.”

Lindsay also addressed her multiple stints in rehab. Speaking about the first of her three trips to rehab, Lindsay admitted she requested treatment after collapsing in her bathroom. She said: “The first time I checked myself in because I had taken Ambien. It’s a sleeping aid but it makes you hallucinate. I’d run a bath and fallen asleep on the floor and it overflowed. When I woke up, I was so scared I called my therapist and said, ‘Can I just go somewhere for a month? I’m around bad people and I need to take care of myself.’ I was terrified, so I put my name in.”