Lily Allen To Take 2 Years Out 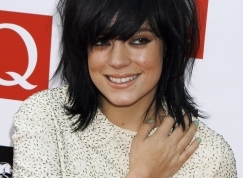 
Lily Allen is taking a two-year break from music. The singer - who failed to renew her recording contract in September - confirmed she will indeed take a break from pop and plans to start a record label for new artists.

Speaking on BBC Radio 1, she said: "My last concert is my Dizzee Rascal concert at The O2 Arena in March. That's the last thing I've got planned. I'm just going to concentrate on doing some behind the scenes sort of stuff. I will take one or two years off from recording and performing music."

While she takes a break she wants to set up a rental fashion store with her sister Sarah called 'Lucy In Disguise'. She said: "It's about making fashion democratic, that's the idea behind it. It's about getting really nice clothes but letting people rent them for affordable prices so they can go out and feel like a million dollars and it won't cost them a million dollars."

During her hiatus, Lily also plans to just "spend some time in the home" she's built for herself.