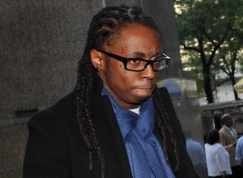 Under the terms of the plea bargain the rapper (27) whose real name is Dwayne Michael Carter Jr., may be sentenced to as much as a year in jail.

New York City police found a .40-caliber handgun on his tour bus in July 2007, and DNA evidence reportedly linked him to the weapon. If he'd been found guilty by a jury, he could have faced up to three-and-a-half years in prison, according to People.com.

He's still not out of the woods – Wayne faces a trial for felony drug possession and weapon possession in Arizona after an incident in which marijuana, cocaine, ecstasy and a handgun were allegedly found on his tour bus.

Lil Wayne Sentenced to One Year in Prison

Lil Wayne Not Allowed to Drink for 3 Years!