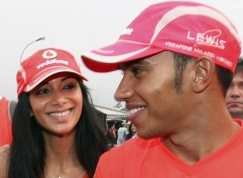 
Formula One ace Lewis Hamilton has refuelled his romance with Pussycat Doll Nicole Scherzinger, after agreeing in a Valentine’s heart-to-heart to ditch his Blackberry and be more romantic.

The pair put a three-point plan in place to make sure their relationship survives its second try, four weeks after they announced a separation ‘to focus fully on their careers’. Lewis has been told to leave his Blackberry when the couple are out and take Nicole to places such as the cinema more. He must also pump more romance into the relationship and call her instead of texting her, say friends.

The pair confirmed things were back on track after sharing a public smooch recently and Nicole (31) has hinted she is ready to wed her fella (25).

A friend told Hello! magazine: ‘The reason they split in January was because they were hardly spending any time together – but crucially they never fell out of love. It was just before Valentine’s Day, during a tearful heart-to-heart, that they decided to give their relationship another go.

'Nicole agreed after laying down strict guidelines to put more romance into their relationship', the friend revealed. One of these guidelines was that Lewis had to leave his Blackberry at home when they dined out together as Nicole didn't like the interruptions. The friend added: 'They also thought it would be an idea not to read tabloid stories about each other.’

It seems the new rules have got off to a flying start, after the singer told reporters at a Hollywood boutique that she was browsing for wedding dresses.

Nicole Scherzinger is in Marbella!