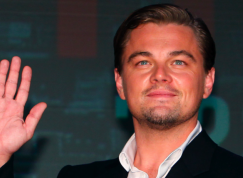 
Leonardo DiCaprio avoided a plane crash over the weekend.

It was an incident you would expect to see in one of his high-powered action flicks, but there was nothing entertaining about Sunday’s Delta flight which could have cost loveable Leonardo DiCaprio his life.

The Inception star was one of 193 passengers aboard the commercial jetliner bound forMoscow, Russia that lost one of its engines just after takeoff, forcing the pilot to return to JFK International Airport. Once the plane had burned off enough fuel to make a safe landing, Leo’s rep issued a statement that read like a giant thank you card to the brilliant pilot and flight crew.

DiCaprio, 36, was headed to an important four-day meeting in Moscow called the Tiger Summit, which focuses on ways to prevent the extinction of tigers. If his commitment to saving the earth and the creatures that inhabit it isn’t enough to make you want to give him a giant kiss, Leo stuck around after Sunday’s terrifying ordeal to sign autographs for the crew members.