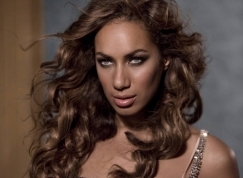 English singer Leona Lewis was left 'shaken' after being slapped by a male fan during a signing for her autobiography Dreams today.

After speaking to police, the visibly distressed X Factor winner left with her eyes hidden behind a pair of dark glasses. Police said a man had been arrested following the incident.

According to Daily Mail, Leona had been due to appear on The One Show following the signing at Piccadilly in central London, but her appearance was cancelled.

One fan at the scene told the BBC: 'My brother saw the whole incident. He [the attacker] walked up there with the book, she signed it and, as she looked up, he just punched her.'

Leona's management released this statement: 'Leona was the victim of an unprovoked attack this afternoon at her book signing. The police were called immediately and medical attention has been sought.'