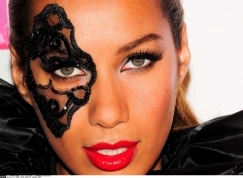 Leona Lewis writes words of encouragement on her hands.

The 'Bleeding Love' singer admits she gets nervous before she performs but has learned little tricks to help keep focused and stop letting her worries get the better of her.

She said: "I try to focus on what I'm doing. I get really nervous beforehand but as soon as I go out, I'm kind of OK. Something else kind of takes over and the nerves just disappear. I sometimes write stuff on my hands, like words from my songs or mantras or something I've read that really helps me. I think that getting up there and performing in front of thousands of people is like putting on a bit of a character."

Leona shot to fame after winning UK TV talent show 'The X Factor' in 2006 but insists she thinks she still would have had a successful music career without the show.

She added: "I really believe in destiny. After I left performing arts college I was working with a lot of producers so I do really believe that I would still have ended up doing music. I don't know one what kind of level it would have been, but I still definitely would have been in this world."