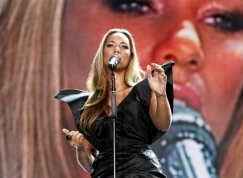 
Leona Lewis was mortified when she accidentally flashed her underwear.

The 'Bleeding Love' singer was in the middle of a performance which included some wind machines and admits they were a little too powerful for her liking.

She said:"I was singing in front of some wind machines when my dress just blew up! I was only wearing a little pair of knickers, so it was really embarrassing. The wind machines were meant to be blowing my hair, so how did it get up my dress? I was like, 'Are you doing that on purpose? Everyone pretended they didn't see, but I know they did."

Although she was embarrassed about showing her underwear, Leona recently admitted she finds skinny dipping "liberating". The 'Happy' hitmaker admitted she and her friends once stripped off and jumped into a swimming pool during a holiday to Portugal in order to cheer up one of their other pals. She said: "I was with some girlfriends in Portugal. One of my friends was going through a hard time with her boyfriend, so we thought let's do something crazy. It was liberating."