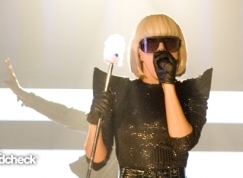 
"American Idol" has invited Lady Gaga in their show as a judge, but the singer replied that she has no interest to participate in TV talent show, because she would find it difficult to criticise someone else's talent, writes Femalefirst.

She said: "I did appear on the show but I am not going to be a judge. I generally feel uncomfortable judging other artists anyway. I don't feel that a musician's life is a contest."

A host of celebrity judges including Victoria Beckham, Shania Twain and Mary J Blige, have appeared on 'American Idol' after Paula Abdul decided not to return for the new season.