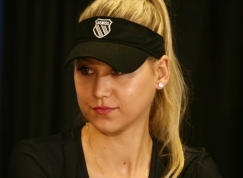 
Anna Kournikova's mother has been charged with child neglect after her five-year-old son jumped from a second-floor window while at home alone.

Neighbours found little Allan Kournikova screaming in pain and bleeding on the pavement outside his luxury home in Palm Beach, Florida. His mother, Alla, had left the house to run errands and locked him in. The blond-haired, blue-eyed boy was recovering after treatment in hospital today. Allan is the half-brother of tennis star Anna (28) who lives 50 miles away in Miami.

Mrs Kournikova (46) told police she had gone out to the bank and post office but left Allan on his own at home watching television because he did not want to go with her. She left him a telephone and locked the front door with a dead-bolt to stop him wandering out.

'Kournikova knowingly left her five-year-old son in her residence unsupervised for in excess of 50 minutes,' said Detective Keith Medeiros in a police report. 'The boy jumped off a second storey roof that was approximately 15 feet high and landed in a white stone yard between two air conditioning units. The child stated he hung by his hands before letting go.'

Allan landed painfully on a patch of stones with no shoes or socks, then headed for the swimming pool to soothe his injured feet. A neighbour later found him wandering outside in the street and called police.

The poice report stated: 'Kournikova failed to provide the necessary supervision to maintain the child's physical well-being...the child had bruising about his feet and lower back as a result of the fall from the second floor. Kournikova is the child's mother and primary caregiver. Based on the above stated facts, there is probable cause to charge Alla Vladimirovna Kournikova with one count of child neglect, a third degree felony.'

She was released from the Palm Beach County Jail after posting a $3,000 bail.