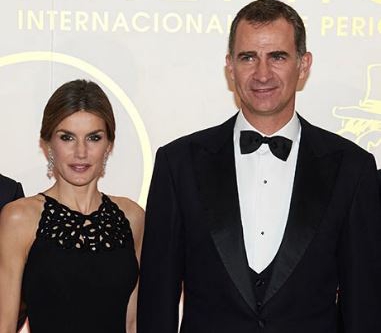 King Felipe VI and his wife Queen Letizia of Spain have been forced to postpone their state visit to the UK. The royal couple were due to visit the Queen in March, on their first trip to Britain since they became King and Queen in 2014.

The state visit was postponed amid the current political situation in Spain following December's general election. After the election resulted in a hung parliament for the first time, King Felipe VI has been meeting with political leaders in a bid to try and form a ruling coalition government.

An official statement issued by the Spanish Foreign Office said: "Notice is given that due to the process of the formation of a new government currently underway in Spain, [the state] visit has been postponed."

Following the announcement, a spokesperson for Buckingham Palace said that the Queen understood why the Spanish royals had chosen to postpone their trip.

"The Queen has been informed of the Spanish Government's decision to cancel the forthcoming State Visit," the statement said. "The Queen, of course, fully understands the decision and the context in which it was taken."

The monarchs were due to visit from 8 to 10 March and were set to stay at Windsor Castle. The castle, which is a 90-minute drive away from London, is often used by Her Majesty as her weekend home.

Details of the itinerary had not been released, but royal watchers were hoping to see Felipe, 47, and Letizia, 43, reunited with the nation's sweethearts Prince William and Kate. The Spanish king and queen attended William and Kate's wedding in 2011 when they were still styled as the Prince and Princess of Asturias.

The last state visit from Spain was by King Juan Carlos I and Queen Sofia in 1986. The king abdicated from the throne in June 2014, but still retains his title.