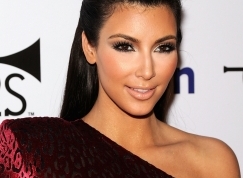 
Reality TV star Kim Kardashian has revealed her slender new figure after embarking on a strict diet and fitness regime.

Kim told followers: 'I’ve finally feel I've reached my goal!', before posting a picture of her hot new body. The 28-year-old was formerly known for her curves but embarked on the strict diet after Complex magazine accidentally released an untouched-up picture of the star. And it looks like Kim is sticking to her guns when it comes to the strict regime - despite it being Thanksgiving in the US.

She told her Twitter followers: “I am on my way to the gym... no excuse for getting lazy during the holidays.”

Paris Hilton and Kim Kardashian - It's a War!