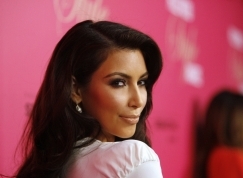 Just when we thought we knew everything about Kim Kardashian - this comes along. According to court documents Kim suffered brutal beatings at the hands of her ex-husband Damon Thomas.

Kim married Damon in 2000 in a super secret ceremony and shortly after found herself a prisoner in her own life.

In 2003 court documents, obtained by Star magazine, Kim says their relationship became abusive "a few months after they were married."

"(We) were going skydiving with Justin Timberlake. Before we left our home, Damon hit me in the face and cut my lip open. I fell into the bed frame and banged my knee hard. I was limping when we went skydiving," admits Kim.

She also claims Damon demanded to know her every move: "If Damon were not home, I was required to call him and ask permission to leave the house. He said that he wanted to know where I was at all times."

The abuse went on for years but Kim never reported him to the police because she scared for her own life...until one day she gathered up enough courage to leave him.

During one encounter after their split, she says, "He threatened to kill me, my family members and the guys that I am dating." She adds, "At this point, I am frightened by the stories that are repeated to me."

Luckily Kim finally divorced him in 2004 and has rebuilt her life. Damon of course denies all the allegations. This is a serious issue and we commend Kim for coming forward and talking about it.

Paris Hilton and Kim Kardashian - It's a War!