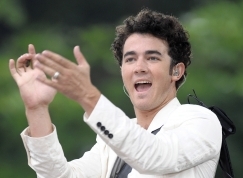 The lovebirds met in 2007 when both of their families were on a trip at the Bahamas. "We're so happy that we're finally married and we were able to share the special moment with family, friends and loved ones," the couple tells People Magazine. The wedding was attended by his younger bros Nick and Joe, and Joe's rumored girlfriend Demi Lovato.

In 2008, Kevin revealed to Details magazine that he had made a vow to remain a virgin until he got married so its pretty funny that the entire world knows that Kevin Jonas is going to lose his virginity tonight.