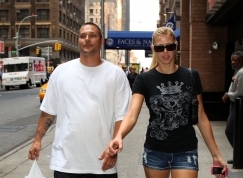 
American dancer and rapper Kevin Federline is going to be a daddy again! His girlfriend Victoria Prince is several weeks pregnant with the couple’s first child. For K-Fed it will be the fifth child!

After one false alarm earlier this year, Victoria supposedly began to suspect that she was pregnant after the couple spent two weeks in Las Vegas in late September. She told Kevin that she was pregnant, but according to insiders, he didn’t seem happy to hear the news. He has already two children with Britney Spears, and two with ex Shar Jackson, making this his fifth.

Kevin isn’t happy about having to go on diaper duty again. “Under no circumstances does he want another kid now,” the insider reveals. “He’s awful when it comes to birth control. Kevin thinks it’s the woman’s responsibility.”