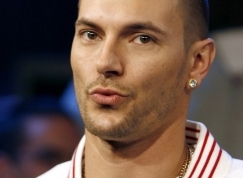 
For Kevin Federline, the very public struggles came with a private pain, as his 2006 divorce from Britney Spears triggered depression and overeating.

"Once you get depressed, you don't really feel like doing anything," Federline (31) told Access Hollywood. "You're kind of discouraged about yourself and then the weight gain too, or that makes me more depressed. … I mean, it's a combination of all of those things."

The difference for Federline was that his troubles played out on a public stage. "Everybody knows what happened with me and Brit," he says. "I'm not going to say that's the total cause of it but, I mean, just not being happy with myself was probably the main part of my depression."

Now slimmed down thanks to his work on VH1's Celebrity Fit Club: Boot Camp, Federline says his life is turning around. "I think as time goes on, it keeps getting better and better and better," he tells Access Hollywood. "I mean, I'm really happy the way that my life is going right now."