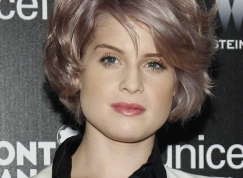 
She may have shed the pounds during her sterling appearance on Dancing On The Stars but Kelly Osbourne has added years to herself with her latest look.

The 25-year-old daughter of infamous rocker Ozzy Osbourne threw together a rather mature look for a night out at the Montblanc Charity Cocktail Hosted By The Weinstein Company at Soho House in Los Angeles.

With her lavender hairdo Miss Osbourne appeared older than her 57-year-old mother Sharon!