Kelly Osbourne is slimming by sweating 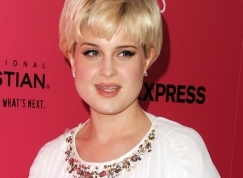 
Singer Kelly Osbourne has sweated her way to a size 8 by starring in US TV talent show 'Dancing with the Stars'. The famous daughter of Ozzy Osbourne has a new, toned physique, but still isn't happy with certain parts of her body.

Kelly told Britain's Closer magazine: "I am a size 8 now since losing more than 14lbs (7 kg) from all the dance training. I've been that small before, but it was when I was taking drugs and was really unhealthy. Now I'm so fit, and even my skin looks better - I think it's from all the sweating!

But she still isn´t totally happy with her body. "I am not loving my upper arms to be honest - I think I'll start doing some weights to tone them up," Kelly admitted.

Kelly has previously revealed she is enjoying appearing on the show much more than she thought she would.