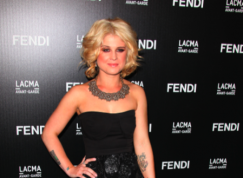 
Kelly Osbourne claims that she been getting a lot of shit since she has lost weight and people have been really "nasty" with her. This just goes to show you that mean people are mean whether you are skinny or fat.

She said: “My weight? People don’t realise it’s as shocking to me as it is to them. When they open up a magazine and they see it ... I’m still getting used to seeing me like this and the changes and the way that ... it’s weird! Girls in Hollywood don’t like you because you become competition. They have started to get much more nasty. You think, ‘Usually you say hi and now you don’t.’ ”

She also says that she now is much more self confident and "strong willed" which is the reason she hasn't started dating any of the boys in Hollywood. Kelly is looking for a man with confidence and she doesn't see that in any of the men in Hollywood. Kelly has completely transformed and she looks great! She looks more confident and all the other women being nasty to her are just insecure.