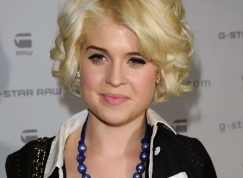 
Battling with her weight for years, Kelly Osbourne understands the dread of stepping onto a scale and seeing the numbers keep rising. But after a dramatic 20 kg drop, the reality star feels better than ever with her new, knockout figure.

"I am much more confident with myself and I really do love my body now," Osbourne (25), tells People magazine. "I was never happy with my body before."

Slimmer than ever before, Osbourne has maintained to keep the weight off due to new eating habits and doing a combination workouts that includes Pilates up to two or three times a week. "I'm doing the bar method between Pilates and ballet," Osbourne says. "It sounds weird but it's fun. I get bored easily so this works. It's incredible to start getting muscles in places on my body that I never knew I could get."

As for new eating habits, Osbourne is on a low Glycemic Index diet that cuts out sugar and carbohydrates. "I can do no sugar because I don't have a big sweet tooth, but the carbs thing is killing me!" Switching from beloved potatoes to more fruits and vegetables is but one part of her new regime, which she likens to the sort of addiction her father Ozzie has battled for years – "the way he likes something and will only eats that for like ever and then he gets sick of it and then goes on to the next thing," she says.

She'll also be the first to admit that every once in a while she slips up: " I had a pizza last night because I was so hungry. I was like, 'I don't care! I'm starving!' "

During New York's fashion Week, Osbourne showed off her glamorous new look and even strut down the catwalk for Naomi Campbell's "Relief for Haiti" charity fashion show.

"I can't believe I'm being perceived like this and everybody wants [to know] who I'm wearing and lend me clothes," she says. "Before, PR companies were horrible and didn't want to give me clothes and didn't want me to wear their clothes. This year every single morning when I wake up to a bellman at my door with a rack of clothes for me to pick and I'm like, 'Oh my God!' "

And she wants things to stay just as they are. "I'm very happy with how I am. I'm not trying to lose any more. I don't ever want to be one of those people who looks like a lollipop head," she says. "I've got a big jaw. and I would very quickly look like one."