Kelly is on junk food diet 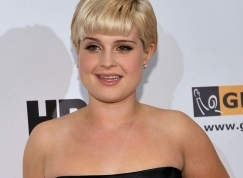 
Kelly Osbourne is working out and getting fit on Dancing on Stars, but her body demands now more junk food than ever!

Kelly told E! News: ”For the first couple of weeks, I was like, ‘I need spaghetti Bolognese!’ And that is what I ate every single day. Now, it’s chicken quesadillas. I love the carbs from the cheese. But I have to stop eating it, because it’s starting to make feel sick because I’m eating it so much.”

And even if she wasn’t busy dancing the weight away, Kelly says she’s avoiding the scale altogether. “If I start weighing myself, I will start being like, ‘Maybe I shouldn’t eat so I could lose some more.” Kelly doesn´t want to get obsessed with loosing weight.

Whatever she is doing is working — and the proof is in how her costume fits. She revealed: “I’m two inches smaller than I was last week. I suddenly have muscles in my stomach that I never had before. It’s all hard and it never was like that.”

But even with the pressure that comes along with learning so many dances, Kelly is not ready to leave Dancing With The Stars, saying that she and partner Louie Van Amstel have become close pals.