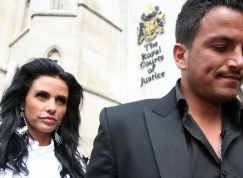 Katie Price and Peter Andre are now divorced. Source: B25


Katie´s ex-husband Peter Andre is reportedly furious that the kids were present at the drunken and violent bash. The singer has allegedly threatened to consult his lawyers after pictures emerged of the siblings looking tired and confused at a new years eve party.

The photographs were posted by some of her guests on their Facebook pages even though Katie made everyone sign a confidentiality agreement not to, as her TV show had the exclusive.

Andre (36) was already livid over the reports that Katie´s boyfriend Alex Reid and former pop star Dane Bowers got into a fight, which, it has now been reported, was allegedly fuelled over Bowers objecting to the way the children were treated. Bowers apparently launched a verbal attack on Katie and Reid, shouting: 'Why are you letting the kids be up well past midnight?' And as the fight broke out, Tiaamii and Junior were reportedly sleeping nearby.

Andre is also angry after Katie refused to let him take their two children to Australia to see in 2010 with his family. He has now reportedly launched a legal battle against her in an attempt to stop the children being exposed to Kate’s partying lifestyle, and may seek new advice on custody arrangements.

A source said: 'The children are Pete’s top priority. He’s not happy about what’s happened and will do everything he can to protect them.