Kate Winslet Has Most Wanted Body in Hollywood 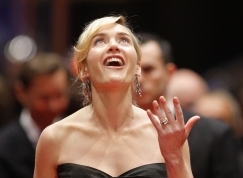 Kate Winslet has the most wanted body. Source: Reuters


According to the Daily Mail, Kate Winslet tops the list for the best bod in Hollywood.

Two thousand women were polled in the UK and asked which celebrity they’d most like to switch bodies with. And we’re pleasantly surprised by the majority vote! Kate won 16% of the women’s votes, beating the gorgeous British model Kelly Brook who took second.

Dr Jacquie Lavin, head of nutrition at Slimming World, which commissioned the poll, says there’s something to be said about the women at the top of the list: “It shows a positive shift that women are more likely to see Kate Winslet and Kelly Brook as the ideal body shape rather than Kate Moss or Victoria Beckham.”

“It perhaps suggests that it is not being "skinny" that is most important to them anymore, it is being healthy,” she continues. “However, there still remains a great deal of pressure on women to conform to an unrealistic ideal and our survey showed that a massive 85 per cent of women are at least occasionally unhappy with their weight.”

Here are the top most-desirable bodies in Hollywood. Who do you think should have won?