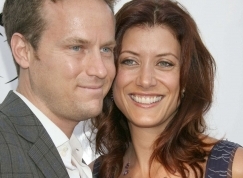 
Following a reportedly tough round of negotiations, a judge ruled Friday that Kate Walsh (42) and her ex-husband Alex Young will divide some of their shared assets with a coin toss.

As reported at E! News, court papers say that some of the former couple's belongings will "be divided by alternating picks after the flip of a coin to determine who will pick first."

In the rest of the divorce settlement announced Friday, Young will receive $627,000 from the Private Practice star, and half of her pay between the start of her Sept. 2007 marriage through their November 2008 separation. The actress gets to keep their L.A. home and "a piano," E! notes.

Walsh and Young, a movie executive, were married for just 14 months.