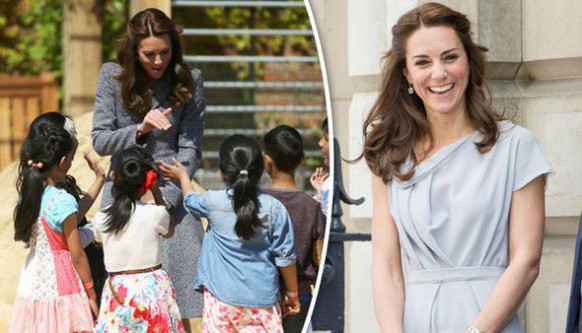 The Duchess of Cambridge went to Princess Diana's ancestral home in London to thank benefactors for raising £10million towards a state-of-the-art mental health centre -- and revealed there is a new member of the Royal Family.

Marvin the hamster has been making himself at home at Kensington Palace and is already a hit with Princess Charlotte.

He lives with the Duke and Duchess of Cambridge in Norfolk, and their children Prince George and Princess Charlotte.

The one-year-old princess is a big fan, apparently and likes Marvin's whiskers.

The existence of Marvin, a royal pet whose role in the Cambridge household has remained undisclosed until now, was revealed as the Duchess opened the new Magic Garden at Hampton Court Palace.

Nine-year-old Darcey from St John the Baptist Junior School in Hampton Wick said: "She said she had a hamster, and Charlotte really likes it because the whiskers always tickle her face."

The Duchess also played down her royal status when it emerged that not all of the children knew who she was.

As she toured the garden, a small girl tugged on the sleeve of the chairman of Historic Royal Palaces, Rupert Gavin, pointed at the Duchess and asked him: "Who's that?"

The Duchess of Cambridge, he replied.

Mr Gavin said afterwards: "Then the child said, ‘Ooh, are you the princess?’

She said: "Just call me Kate."

Despite the blue skies and bright sunshine in London, the Duchess recyled a grey Michael Kors coat for her visit to the Magic Garden at Hampton Court Palace.

The mother-of-two had a busy day ahead as she visited a magical garden, attended a mental health lunch and views pictures of herself which featured in Vogue at a glamorous exhibition.

The garden, which draws inspiration from the myths and legends of the Tudor court, is set within King Henry VIII's former Tiltyard and has taken six years to create.

Schoolchildren excitedly played with the 25ft long sleeping dragon and took time out from building sandcastles to say hello to Kate.

The Duchess came face to face with a red dragon and explored the garden's moats, battlements and hidden dragon nests.

She was last seen wearing the Michael Kors coat in 2014 when she and husband Prince William left Australia with Prince George.

The Duchess chose to pair her £1,870 coat with a nude and metal trim LK Bennett clutch bag.

She later removed the coat to reveal a knee-length dove grey dress by Roksanda Ilincic -- another favourite that she wore during the Royal tour of Canada and more recently at a Royal Academy of Arts.

The Duchess of Cambridge said she was desperate to "take off her shoes and run around" the palace garden.

Kate was officially opening the new feature at the palace in south west London when she made the revelation.

And while talking to the some of the gardening team she declared her barefoot ambitions.

Tiltyard team member Barbara Smith talked with the Duchess about the garden's daffodils, then specifically about her own in Norfolk.

She said: "Then I asked her if she had any time to have some fun (during the Magic Garden visit).

"She told me she was desperate to take her shoes off and run around."

The garden was designed for Historic Royal Palaces, the independent charity that cares for Hampton Court Palace, and begins an exciting new chapter in the palace’s 500 year history.

While palace curators have advised on the history retold in the garden, the renowned Historic Royal Palaces' gardens team have been hard at work planting more than 17,000 bulbs and 3,000 shrubs to create the garden's magical landscape.

The garden is topped off by a bejewelled crown based on a recreation of the King's own, which is on display in the palace's Chapel Royal.

Designer Robert Myers said the Duchess was "very enthusiastic" about the new facility and they talked about the design process and the inspiration for it -- as well as the way it draws on the stories, myths and legends of Hampton Court.

He said: "I think she was really taken by the way that this is a garden where children are really encouraged to touch, feel and roll.

"In contrast to the palace, which is very hands-off, 'don't touch', the garden is somewhere children and adults can let off steam.

“The children were telling her how wonderful the slides were, and one of the children asked her if she would like to try out the slide, and she said perhaps not today because she wasn’t in the right attire, but she might come back with George.”

The chairman of Historic Royal Palaces Rupert Gavin said the Duchess was "bowled over" by the garden.

He said: "She could immediately see just how wonderful it was and has said she really is looking forward to bringing her own children."

Kate also undertook her her first engagement as patron of the Anna Freud Centre and was guest of honour at a lunch reception supporting the development of a new centre of excellence for children's mental health.

Discarding her coat to reveal another old favourite, a dress by Serbian designer Roksanda Ilincic, Kate attended the lunch at Spencer House, one of London last private palaces.

The 18th century mansion is owned by Prince William's uncle, Earl Spencer, but is leased to another friend of the royals, financier Lord Rothschild, who welcomed the Duchess.

The lunch reception supports the development of a new centre of excellence for children’s mental health.

The charity runs a school near King's Cross station for children excluded from mainstream education and plans to build a £34 million integrated centre of excellence combining research, teaching, and other assistance for troubled children and their parents.

Kate attended a lunch for 42 people to thank major donors who have so far raised £3.25 million towards the £10m capital needed to complete the £34 million project.

She met families who have benefited from the centre, as well as key supporters, and watched a short film about the ambitions of the organisation.

The centre's chief executive, Peter Fonagy, said: "She has done a tremendous amount to raise awareness of child mental health as an issue."

Kate has a continued interest in drawing attention to child mental health issues and the importance of early intervention, and working with the whole family to provide children with in-school mental health services.

The latest donor is the Pears Foundation, which has given 2.5 million.

The Duchess chatted to several parents whose children have been helped by the charity, including Vicky Fard, who met Kate at the school in September with her daughter Mia, 12. She was referred to the school with behavioural problems including attention deficit, hyperactivity, and oppositional defiance but is now there only part-time after making excellent progress.

Vicky, from West London, told Kate: "Mia is doing really well. She is back in mainstream school now."Kate, 34, previously visited the centre's family school at the start of term in September, to see howit provides alternative education for children with serious emotional and behavioural issues and their families.

The public engagements come ahead of Kate's first Vogue cover shoot hitting the newsstands and her day of engagements will be topped off with a visit to the National Portrait Gallery to view the Vogue 100: A Century of Style exhibition.

It will be the first time she will have seen two photographic portraits of herself which were taken as part of a wider spread in British Vogue's centenary June issue.

The National Portrait Gallery, of which Kate has been patron since 2012, has collaborated with British Vogue on the series of portraits, shot by photographer Josh Olins in the Norfolk countryside, and styled by Vogue Fashion Director Lucinda Chambers.

A beaming Kate was photographed on the Queen's Sandringham estate in Norfolk for the fashion bible’s prestigious centenary issue.