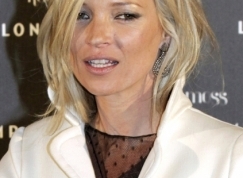 The British supermodel — who has a seven-year-old daughter Lila Grace from her relationship with magazine publisher Jefferson Hack — is reportedly househunting on the island of Stromboli, off Italy, and has already tried to buy a plot of land to build a coastal home after falling in love with the region during a recent cruise holiday. “Kate’s keen on one plot of land and has offered the fisherman owner a hefty sum,” a source told British newspaper The Sun. “When she wants something, she won’t give up.”

Stromboli — which is home to just 850 residents — has a live volcano, which last erupted in 2002, generating two landslides and tsunami waves. And in 1930 — its largest eruption in 100 years — flying volcanic bombs from the lava killed several residents and destroyed a string of houses. Kate ought to be careful of the potential damage a volcano could cause her property, as she has never experienced the best of luck with her homes.

Three months ago, the London mansion she shares with boyfriend Jamie Hince was burgled, with the thief stealing an original Banksy painting worth $140,000. Days later, the house was flooded with sewage, causing $200,000 of damage. Last year, the British beauty was “driven mad” by a flock of doves which kept flying in through her windows, while in September 2008 she and Jamie took an impromptu trip to Ibiza, Spain, when her house had to be fumigated after the property was plagued by fleas from her two Persian cats.

She has previously had to replace the trendy rush mat floors with plush carpet because they were giving Jamie sore feet and she has also had problems with her local council after neighbours complained about a stench from her drains and a crumbling garden wall. Kate and Jamie are said to be so worried they hired a professional exorcist to cleanse their house of “evil energy”.