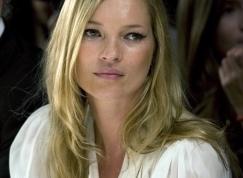 
Kate Moss has sparked controversy after making comments about extreme slimming and celebrity diets. The supermodel caused outrage after revealing she has tried to live by the motto "nothing tastes as good as skinny feels".

The 35-year-old British beauty - who has a seven-year-old daughter, Lila Grace - has now been accused of encouraging young people to develop eating disorders. In an interview she said: "There are loads of mottos. There's, 'Nothing tastes as good as skinny feels'. That's one of them. You try and remember, but it never works." Similar phrases can be found on highly-criticised pro-anorexia websites, aimed at helping inspire extreme dieters.

Dr Anthea Fursland, a psychologist who specialises in treating eating disorders, told the Sydney Morning Herald newspaper: "The term is used in anorexia websites to reinforce to themselves and each other to pursue thinness. I think it could have quite a large impact having someone so famous saying that. She is just giving credence to a belief that we are trying to move away from."

Model Katie Green - who launched the Say No To Size Zero campaign in the UK earlier this year - also blasted Kate's remarks, warning that websites which encourage eating disorders will "go crazy" over her comments, believing she supports their cause.

Dave 18-10-2010 19:51 If you are looking for workout routines to get your body fit and burn calories, you can find a great selection of workout routines at http://www.fitclick.com/workout_routine .
I customized my own workout program that works great for me.
0