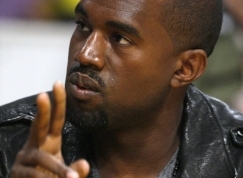 
Kanye West is being sued by fellow rap star Marion "Suge" Knight over a shooting at a star-studded Miami Beach party.

Marion "Suge" Knight, founder of Death Row Records and promoter of some of rap's biggest acts, was shot in the right leg in August 2005 by a still-unknown assailant at the ultra-trendy Shore Club party, which was hosted by Kanye before the MTV Video Music Awards held that year in Miami.

Suge's lawyer said he had 200,000 dollars in medical bills from a gunshot that shattered his thigh bone and will seek total damages of well over 1 million.

"He's an icon in the music industry. He walks in a room and he lights it up," lawyer Marc Brumer said. "He had an expectation of security there. How someone came with a gun into a very VIP party, that just doesn't meet the smell test in life."

US District Judge Patricia Seitz has scheduled a December 6 trial date in Miami. No one has ever been arrested, and like many other shootings in the rap world, police found few witnesses although the club was packed with partygoers, including Jessica Alba, Eddie Murphy, the Black Eyed Peas and Paris Hilton. At least six shots were fired, police said.