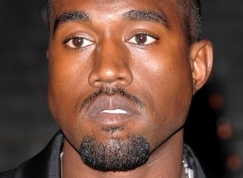 
Kanye West has been super MIA lately, but his car made a very public appearance this past weekend.

Kanye reportedly gave his cousin permission to borrow his Porsche Panamera on Saturday night. Just a few hours after he picked up the car he drove it straight into someone's home at 4AM in Honolulu, Hawaii.

Eyewitness Chris Cooper was the first person at the scene of the collision. He said: “There was just a tremendous crash. As if a small building were coming down. I looked over and saw the car impaled in the garage. “I walked over to see if anyone was dead or people in the car because I could smell liquids and I could hear them draining and no one was there.”

According to reports, witnesses told police they saw three men running away from the scene of the crash and the vehicle was reported stolen shortly after the incident occurred. There's no word from Kanye's camp yet so we're not sure if his cousin actually had permission to drive it or if it was really stolen.