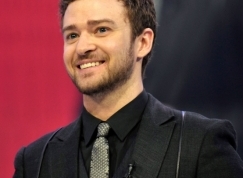 
Justin Timberlake is one of the most talented stars in Hollywood, but believe it or not, when it comes to his own talents, he's very insecure.

JT, who has been singing, dancing and acting since he was 12, admits that after all this time, he's still not secure about his own talents. “I think I’m equally insecure about both of them,” he said. “I’ve been doing this for two thirds of my life and I still consider myself pretty young but I think that’s the part you battle with all the time.

“When you’re creating your art, that’s the best part. Your senses are on a creative high and then the part where everyone gets to see it and comment on it, that’s the part I think you battle with until you die," he added, "It’s absolutely terrifying.”

Poor Justin, he's so talented, he's insecure about it. Come on! You have like a zillion Grammy awards and and Emmy! It's safe to assume you're talented!