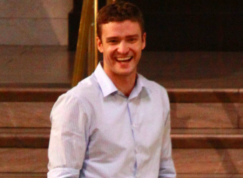 
Justin Timberlake has built a golf course at his house.

The pop heartthrob — who is obsessed with the sedate sport — has paid for a five-hole putting green to be installed at his Los Angeles mansion so he can practice anytime he wants. “Justin loves golf and is keen to improve his skills as much as he can,” a source said. “Now, he can sink a few balls whenever the mood takes him.”

The SexyBack singer — who is dating Jessica Biel — has also had a basketball court installed at the Mulholland Drive property, which he bought for $10 million in 2002. It seems Justin’s Hollywood home is becoming a shrine to the sport. The 29-year-old singer recently converted one of the larger rooms in his house into a miniature green so he can practice his shots indoors.

“He uses bundled blankets to fill in for sand traps, and overturned couches and tables to serve as hazards,” a source said at the time. “When you first see the room, it looks like a tornado has hit it, but then Justin explains that it is perfectly set up to improve his game!”

Justin plays off an impressive six handicap and even owns his own course, the Big Creek Golf Course near Memphis. He also hosts an annual charity Professional Golf Association (PGA) Tour event, the Justin Timberlake Shriners Hospitals for Children Open in Las Vegas.