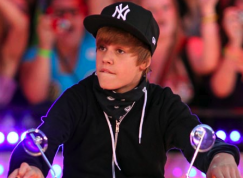 The 16-year-old heartthrob is sick of followers who become hysterical in his presence and wishes they would just have a normal conversation with him instead. He advised: "Just talk to me. Ask me how I'm doing. Introduce yourself instead of yelling, 'Justin! Justin! Justin! Can I have a picture?'"

The 'Baby' hitmaker has also lashed out at fans who interrupt him while he is in the middle of a meal. He added to Teen Vogue magazine: "And don't come up to me while I'm eating. How would you like it if I came into your house and started taking pictures of you while you were eating? I hate that."

However it is not just his fans Justin is tired of - the teenager singer admits he is astonished by the way his popularity has made it impossible to escape himself.

He complained: "It's still amazing to see people wearing my shirts, but I feel like I can't get away from myself. Like, I go to Walmart and I just want to go get some boxers and socks, but there are posters of me everywhere. Or my song comes on the radio, and it's like, 'Aah!.' "