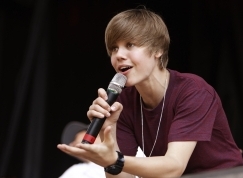 Justin Bieber has to ask his mother for money.

The 16-year-old 'Baby' singer admits that, despite being a worldwide sensation, his mother Patti Mallette still makes him abide by her strict rules.

He said: "I don't really have an allowance. When I want to get something I just have to ask my mom.' I usually have to be home by 10 o'clock and my mom takes my computer away at 10.30pm every night."

The teen sensation admitted to talk show host Oprah Winfrey he had recently experienced one of his mother's punishments after misbehaving. He told her: "I got my phone taken away for four days. Because I'm travelling so much my mom takes thing I really, really like - like my computer or my phone."

Oprah then asked him: 'You don't say 'Mom I can't get grounded, I'm Justin Bieber?' " The singer laughed and admitted he wouldn't stand up to his parent. He explained: "She would slap me in the face if I said that."

Although he has a tight schedule, Justin tries to take one day a week off to be a "regular kid" and socialise with his friends or play sport. He added: "Sometimes that day I just sleep all day, because from the six days before that I'm exhausted."