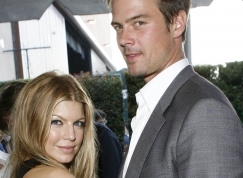 
Fergie, who has a starring role in the upcoming movie musical Nine, says her hubby Josh Duhamel didn't mind when she had to add a few extra pounds to her famously toned body.

"When I came home from filming he was excited. He enjoys having both: the extra meat to grab when it's there and the tight stomach when that's there," she tells Cosmopolitan in its December issue. "He's never been critical."

The interview was conducted before allegations surfaced that Duhamel (36) was unfaithful to his wife of less than a year. But the couple, who through reps have both called the claims of infidelity "ridiculous," have put on a united front. The pair snuggled over dinner in Atlanta this week.

In the interview, Fergie (34) paints the picture of a marriage in which Duhamel would have little reason to stray. "You know, in Italy, Catholic boys are raised to believe that there are two types of women: the Madonna and the whore," says the sexy singer. "And me? I'm both."

Fergie wants a baby next year (1)

Fergie wants a baby next year (1)