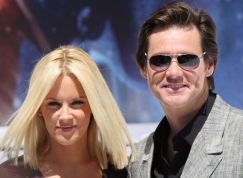 
Jim Carrey and Jenny McCarthy have split after being together for five years.

The 48-year-old comedy actor wrote in twitter that his relationship with Jenny had ended, but insisted the split was amicable.

He wrote: "Jenny and I have just ended our 5yr relationship. I'm grateful for the many blessings we've shared and I wish her the very best. S'okay!Be of good cheer folks! It's a beautiful world, and we're all gonna get what we need the most! (sic)"

Jenny also took to twitter to reveal news of their split, saying she was "grateful" for their time together and would continue to be "committed" to his daughter Jane, 22. She said: "I'm so grateful for the years Jim and I had together. I will stay committed to Jane and will always keep Jim as a leading man in my heart."

In February, Jenny revealed her excitement at the birth of Jim's daughter Jane's first son Jackson saying: "I think I'm going to be an awesome grandma, the world's best is what I say."

Just last month former Playboy model Jenny claimed she would marry Jim, but only for tax reasons. She said: "We say 'never', but I don't know. Maybe for tax purposes, someday, when we are old. That's why we keep joking - like, when we are 70! But for now, we're fine. We are really fine!"

Jim has been married twice before, first to waitress Melissa Womer - Jane's mother - with whom he split from in 1995, and to his 'Dumb and Dumber' co-star Lauren Holly, which lasted less than a year after they tied the knot in 1996. Jenny was previously married to actor-and-director John Mallory Asher in 1999. The couple had one son, Evan, born in 2002, before they split in 2005.