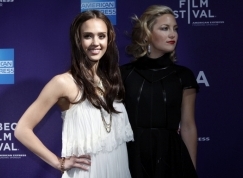 
Jessica Alba was upset by her latest movie 'The Killer Inside Me'.

The 29-year-old actress plays Joyce Lakeland in the Michael Winterbottom - directed thriller movie - which tells the tale of a Texas policeman who is slowly discovered to be a psychotic murderer - and she admits the film is hard to watch.

She said: "It stays with you, especially this. It's a difficult movie to shoot and it's difficult to watch. It's about a very dark subject so I think if you are being true and authentic then it does definitely affect you."

Her co-star Kate Hudson also had difficulty filming the movie, and completed some scenes in an enclosed environment - especially ones with actor Casey Affleck.

Speaking on the red carpet at the Tribeca Film Festival, she said: "we were working in a really intimate setting so it was really just me and Casey and the director Michael in a room together being able to sort of, fool around with the scenes and get to that place and feel like we can just be intimate. There is some a*s slapping involved." 'The Killer Inside Me' is due for a limited theatrical release in the US on June 18.