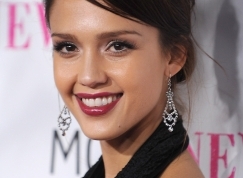 
Jessica Alba has revealed she hates the institution of marriage. Alba, who wed husband Cash Warren in 2008, has admitted she had a hard time agreeing to get married because she thinks the tradition is "warped."

Alba told that originally it was two families coming together to make a stronger family. It was about survival – not love or soulmates. "And now, the way they market marriage – even as a kid through Disney movies – is that it’s all about Prince Charming sweeping you off your feet. There’s this mentality that you need the big dress and the big day – the day every girl gets to be a princess. I didn’t agree with any of that.”

But the 28-year-old, who has a 19-month-old daughter, Honor Marie, with the producer, says she changed her mind as she liked the idea of being able to choose someone to come into her family fold. She explained: “I chose to get married because, essentially, you’re given a deck of cards in life… the one person you can choose to bring into your life as your family and to have that unconditional love with is your husband or wife."

But Jessica won't be taking the whole 'to obey' vow too seriously. She said: "This tradition of obeying your husband like he’s king? It’s a load of crap!"