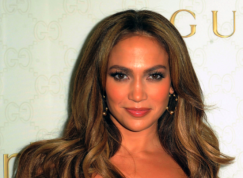 
Jennifer Lopez has sacked her publicist.

The singer-and-actress has parted ways with Leslie Sloan and her colleague Nanci Ryder - who she has been working with for the past six years - after an alleged row over her manager Benny Medina. While Nanci refused to comment on the details she did say: "I think Jennifer is fantastic and I'm very sad that we're not going to be representing her anymore."

Jennifer's manager Benny said: "Artists and PR companies parting ways happens all the time. This is as much news as me re-doing my furniture." Although Jennifer has sacked her publicist, her career has been going from strength to strength in recent months, signing a deal to create a fashion line with husband Marc Anthony - who she has two-year-old twins Max and Emme with - and becoming a judge on 'American Idol'.

Speaking about her new role on the TV talent show, Jennifer, 41, promised she would be "tough" but "fair" on the contestants. She said: "I really want to put them through the wringer in the sense that I don't want to let anybody really great go because they're nervous or whatever and not get to see what they could've been. We working with them a little more than maybe you've seen in the past. We give them more of a chance."