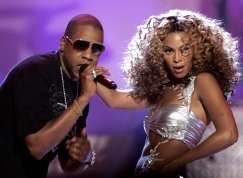 Jay-Z and Beyonce are the king and queen of RnB. Source: Scanpix/Reuters


Jay-Z is ready to start a family with wife Beyonce Knowles. The couple - who almost never speak about their relationship publicly - are reportedly trying for a baby and rapper Jay-Z can't wait to become a father.

A source close to the rapper told National Enquirer magazine: "He's normally very secretive but Jay-Z is so excited about the prospect of becoming a dad, he just let slip that they're trying for a baby."

Although Jay-Z has admitted he is ready for fatherhood, it seems Beyonce is trying to keep the couple's baby plans under wraps. The 'Sweet Dreams' singer - who has been married to the hip-hop star for 18 months - recently claimed she wasn't ready to have a baby right now but does eventually want to be a mother. She said: "It's not time for that yet. But definitely there will be a time. I want to be a great mother, the kind of mother that I have. I want the same bond that I had with my mom and that would be enough for me."

Jay-Z To Buy Beyonce A Yacht For Her Birthday!