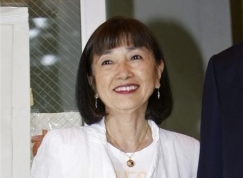 Japan's first lady Miyuki Hatoyama, who has made headlines with tales of her alien encounters, drew fresh media attention for being a fashion ambassador for humble blue jeans.

The 66-year-old wife of Prime Minister Yukio Hatoyama won the oddly named "Best Jeanist Award," a prize given to denim-clad celebrities, together with musicians and artists including Taiwan actor Jerry Yan.

Miyuki said she and her husband were wearing jeans when they first met in California while he was studying at the prestigious Stanford University. T

"This is the prize I have long wished to win," Hatoyama told a press conference, wearing traditional blue jeans. "I'm a jeans lover. I'm always putting on jeans as they're easy to wear."

Ferrari's, Lamborghini's and Mercedes in multi-million dollar crash in Japan (1)