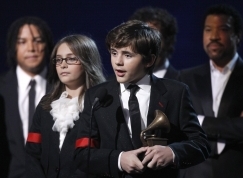 
Michael Jackson's kids attended the Grammy awards and accepted his posthumous lifetime achievement award. This was their first public appearance since their father's memorial service.

"We're proud to be here to accept this award on behalf of our father, Michael Jackson," said Prince, as he tried to hold back tears. "First we'd like to thank God for watching over us for these past seven months and our Grandma and Grandpa for their love and support. We'd also like to thank the fans. Our father loved you so much since you were always there for him."

"Daddy was supposed to be here. Daddy was gonna perform but he couldn't perform last year," said Paris. "Thank you, we love you Daddy."