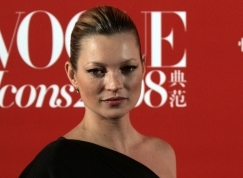 
She has dated Hollywood stars, drug addicts and musicians. Now it has been claimed that model Kate Moss even enjoyed a romance with royalty. Prince Emanuele Filiberto claimed he had a six-month affair with Moss in 2001 and 2002.

The Prince, a 37-year-old hedge fund manager, told how Sixties star Marianne Faithfull brought the pair together, by taking Miss Moss to Filiberto’s house on the Mediterranean island of Corsica. The romance took place after her break-up from Pirates Of The Caribbean actor Johnny Depp but before she started dating heroin addict Pete Doherty.

Emanuele told: ‘She is a beautiful woman, very charming and not at all bizarre.’

Prince Filiberto is the only child of Vittorio Emanuele, Prince of Naples, heir to the now defunct throne of Italy.