It's a Girl for Adriana Lima 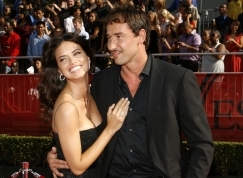 
Adriana Lima now has a little angel of her own: the Victoria's Secret model and her husband, NBA star Marko Jaric, welcomed a daughter on Sunday.

"Adriana and Marko are thrilled to announce they had a baby girl, Valentina Lima Jaric," a rep for Lima tells People magazine. "Mother, father and baby are all doing well."

Lima (28) met the Memphis Grizzlies star (31) in 2006 and got engaged two years later on Lima's 27th birthday. The couple eloped on Valentine's Day this year, tying the knot in a small, private civil ceremony in Wyoming.

Soon after the honeymoon, Lima learned she was expecting. "We wanted this. We were ready." she told People magazine. "Even in my wildest days I knew that I wanted to be the ultimate family man," Jaric adds. "We're ready to settle down."