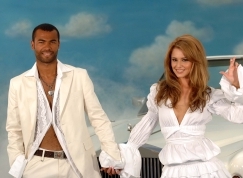 Ashley and Cheryl Cole used to be a dream couple. Source: Scanpix/Starstock/Photoshot


Having the fastest-selling single of the year should have been a cause for celebration for X Factor judge Cheryl Cole (26). But her joy proved short-lived when her footballer husband Ashley refused to attend a party to mark her success.

The Girls Aloud star had planned a party at London’s Mayfair Hotel last Sunday after her debut solo single, Fight For Your Love, went to No1. But she cancelled it at the last minute, apparently in floods of tears, when Ashley (28) declined to come.

‘The Cole household is not a happy one at the moment,’ a friend told Mail Online. ‘Ashley has a touch of the green-eyed monster and doesn’t like being in Cheryl’s shadow.

There’s a lot of tension between them because Cheryl is busier and busier and she is now eclipsing Ashley’s success. 'He’s acting like a spoilt child because she’s getting all the attention.’

Chelsea and England defender Ashley was in the audience when Cheryl, 26, appeared on X Factor to launch her single two weeks ago, but only after her bandmates badgered him.

The Coles hit trouble last year when Ashley allegedly had a fling with mother-of-one Aimee Watson.