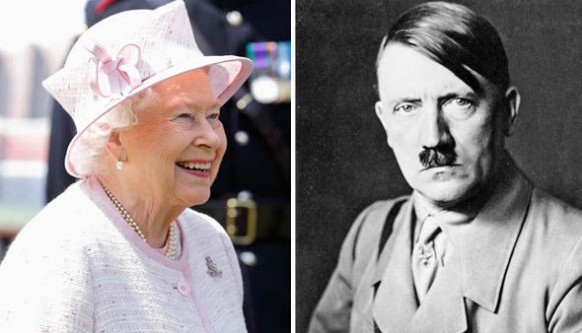 The Queen famously helped maintain public morale by braving the Blitz - but her more light-hearted role in mocking Hitler has emerged in the run-up to her 90th birthday celebrations.

She and her family earned the respect of bombed-out Britons by staying at Buckingham Palace - but as Princess Elizabeth she also liked to see the funny side.

On one occasion, it has emerged, while at a Sea Rangers camp, she took part in a comedy sketch called Mein Kamp, lampooning Hitler’s autobiography Mein Kampf.

The Princess, a Girl Guide and then a Sea Ranger, took part in the skit in 1943 aged 16, joining girls performing for her mother, the then Queen Elizabeth, beside a campfire at Virginia Water in Surrey.

She rowed her mother across Virginia Water, a lake in Windsor Great Park reputedly named after Elizabeth I, the Virgin Queen, to tea around the campfire, where the girls, including Elizabeth, sang sea shanties and performed their sketch ridiculing the Nazi dictator.

As a Sea Ranger during the war, the teenage Princess learnt how to sail, cook in a slit trench and re-leather rowing oars. There were several camps at Virginia Water.

Before the Sea Rangers, she and her sister Princess Margaret had become Girl Guides in 1937 at the suggestion of their governess, Marion Crawford.

Reluctant at first, their father, George VI, agreed to the creation of the 1st Buckingham Palace Guides Company, formed by the daughters of 20 courtiers and palace staff.

The King said: “I’ll stand anything. But I won’t have them wear those hideous long black stockings. Reminds me too much of my youth.”

When the Blitz began in 1940, Girl Guides threw themselves into the Keep Calm & Carry On spirit.

After earning proficiency badges as swimmer, dancer, horsewoman, child nurse, needlewoman, and interpreter, the Princess was enrolled in the Sea Rangers, part of the senior section of the Guiding movement, in February 1943.

For her 18th birthday, the Girl Guides Association gave the princess a tent, a sleeping bag and a rucksack containing a looking glass, an oil-silk sponge-bag and an aluminium egg cup.

The Queen wrote in 2009: “I have fond memories of my years as a Guide and Sea Ranger.”

A group from the Girl Guides will be among representatives of some of the 600 patronages taking part in the Queen¹s official birthday weekend picnic for 10,000 people in The Mall, which will be replicated by similar large events around the country.

All 10,000 tickets for the June 12 street party outside Buckingham Palace have been sold, with around 2,500 going to the public and most of the rest to organisations across the Commonwealth that count the Queen as their patron.

However, about a quarter of the charities or other organisations decided not to buy tickets. One in 10 in the UK declined amid controversy about the cost.

The event’s organiser, the Queen’s grandson Peter Phillips, hopes there will be street parties across the country on June 12 to mark her 90th birthday.

The Big Lunch, a nationwide attempt to bring communities together in street parties, is combining to organise events that day.

In addition, there will be several other major events organised by the Queen’s charities.

The Royal Navy Charity is holding a party for 4,000 guests in Portsmouth Dockyard and the Royal Agricultural Society has a party for 8,000 in Cirencester.

In Birmingham, the Royal Academy of Dance is hosting an event for young dancers in New Street Station.

The Royal Variety Charity has an event for elderly entertainers in Twickenham, south west London.

Prime Minister David Cameron will mark the day at a party in his constituency and London Mayor Sadiq Khan also has plans to honour the Queen that day.

It is not clear yet if Labour leader Jeremy Corbyn, a republican, will attend an event marking that day marking the official birthday weekend of celebrations.