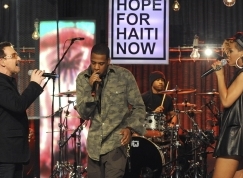 
Friday night's celebrity telethon Hope for Haiti Now: A Global Benefit for Earthquake Relief has so far raised more than $57 million – a record for a disaster relief telethon, said the event’s organizers.

In addition the star-studded Hope for Haiti Now album, featuring performances from the evening, is the biggest one-day album pre-order in iTunes history.

The charity event, spearheaded by George Clooney with the support of many of Hollywood's A-listers, featured two hours of musical performances and appeals for donations for earthquake relief.

The money raised will be split among Oxfam America, Partners in Health, the Red Cross, UNICEF, United Nations World Food Programme, Yéle Haiti Foundation, and the Clinton-Bush Haiti Foundation. Donations can still be made for the next six months by going to hopeforhaitinow.org.