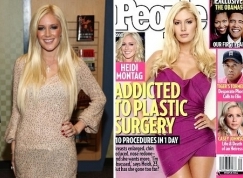 Heidi Montag before and after the numerous surgeries.


Heidi Montag recently returned to Colorado to see her mother Darlene for the first time since her ten plastic surgeries. And she mentioned at the time how nervous she was about her reaction.

And Heidi says she was shocked to hear what her mother had to say about her procedures. "I was nervous, but also excited … I never thought in my wildest dreams she was going to react the way she did,” Heidi tells People.

But Heidi thinks the reaction had to do with the fact that Darlene was jealous that Spencer knew about it and she didn’t. She continues, "I think she was most upset that Spencer was there for me and she wasn't. She was saying how sad it is that my confidence is gone because of the music industry I'm trying to get into."

Heidi definitely doesn’t agree that she looks like a freak, and says it was a business decision
for her. "I wanted to be the most beautiful, inside and out. It's part of being a pop star.”

Heidi is upset about her mother’s views, but says there’s nothing she can do about it now. "I tried to leave it as best as I could, but my heart was breaking," she says.

It’s sad to hear that Heidi won’t even listen when it’s her own mother telling her it was a bad idea. Let’s hope Darlene is able to step in before the next round of surgeries.