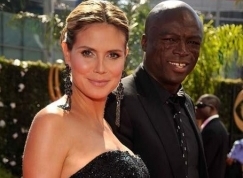 
The bond between Heidi Klum and husband Seal just got a little closer. On Friday, a Los Angeles commissioner approved Klum's legal name change to Heidi Samuel, her husband's surname.

In her filing, Klum (36) gave a one-word reason for the change: Marriage. The couple tied the knot more than four years ago, and Klum gave birth to their fourth child last month. This week, the model made a surprise appearance when she walked the runway in the Victoria's Secret fashion show in New York just six weeks after giving birth.

A rep for Klum did not comment when asked if the Project Runway host intends to be known professionally as Heidi Samuel from now on.